From 1937…ahem…Onward, Walt Disney Animation Studios and Pixar Animation Studios have provided no shortage of family-friendly entertainment. Any Disney aficionado has debated among friends as to which films are the greatest (or the most unappreciated) and struggled in vain to commit to a single number one. Okay, maybe number one is clear in your mind, but two and three are a little murky.

Indeed, composing this piece was a challenge. I knew I would encounter critical moments where one title would have to claim supremacy over another, but I did not expect to look at the fourth, fifth, and sixth revisions of the list and still find myself thinking, “How is that all the way at number sixty?”

After many painful hours of introspection and pleasant hours of binge-watching of all 80 films in order, I arrived at a definitive ranking with which I am happy. It’s the end result of evaluating all 80 films one way and then another, from their IMDb rankings to a critically artistic review of the animation, storytelling, and music.

I did my best to consider the film within its respective period. What was ground-breaking at its release received more weight than whether the film held up by today’s standards. Other considerations, like the restrictions of the day, were harder to accommodate but, hey, we do what we can.

So prepare yourself for this 8-part series ranking the 80 canon Disney and Pixar films from greatest to even greatest-er. I present them with no quantification; their rankings are respective to one another, so do not feel bad if a favourite appears further down than you expected!

Also provided, a single song from the film if you want some listening enjoyment (the title anyway – don’t want to cause issues by embedding copyrighted material!)

The single greatest thing working against Chicken Little is that it occurred square in the middle of the Post-Renaissance Era. Well, Post-Renaissance is how many refer to this period of Disney animation. I prefer to refer to it as the Experimental Era. It’s a point in Disney history where Pixar begins to outperform them financially and Disney, already experimenting with computer animation for two decades, begins to explore how they will use their new technological tools moving forward.

It results in this somewhat awkward and uneven phase, a sort of beta testing. And unlike prior periods where Disney seemed to select stories because of the unique animation challenges they offered, this period was one where they seemingly apply animation techniques to whatever story they wanted to tell.

So there’s not much to tell. The movie is fine, but made for a quick bump towards the bottom of the list with so many better titles.

Look, this film has a lot going for it. It has a good heart and some nice humour – the lady squirrel, the fight between Merlin and Mim. It’s even the debut of the Sherman Brothers, who the not-so-hardcore Disney fans might know best from the Mary Poppins soundtrack if those names don’t ring a bell.

Still, it suffers from production issues. Case in point, protagonist Wart had three, three, different voice actors: Rickie Sorenson, Richard Reitherman, and Robert Reitherman. That alone could be jarring, especially as the three actors have distinct voices, but because of the editing on the film one can sometimes detect the obvious shift between actors within a scene.

Chalk this up to Walt’s focus on a secret project near Orlando, Florida I suppose.

The Walt Disney Animation Studio precursor to Chicken Little, this is my personal least favourite of the entire canon. Similar to what was said of Chicken Little, the film mostly suffers from its role as an experimental medium for the studio working out how to best use computer animation.

Rather than re-hash the same points from Chicken Little, let’s suffice to say it’s a common problem for the era that Disney would resolve by reverting to traditional animation for The Princess and the Frog before pulling it all together with Tangled.

Now we head back the other direction, a la The Sword in the Stone, where the issue was production rather than artistry. Still feeling the effects of World War II which had all but ended Disney Studios, Disney looked for some cheaper production wins to get the studio back in black. This took the form of several compilation releases featuring shorter stories; in this case, The Adventures of Ichabod Crane and The Wind in the Willows.

Don’t get me wrong – these stories are fun. Bing Crosby narrating the lanky Ichabod against a Brom Bones who might be the descendant of Gaston; the sheer mania of Mr. Toad (and the nostalgia of his gone-but-not-forgotten Wild Ride). They are lesser productions even than other compilation releases of the period though.

Case in point, two years prior Disney released Fun and Fancy Free featuring two other tales: Bongo and Mickey and the Beanstalk. Like Ichabod and Mr. Toad, the stories provide some nice fun and a reminder that Disney is a studio who makes feature-length animated entertainment. They did what they could with their budget, still offering Disney quality but not at the level seen during the Golden Age or in the subsequent eras after the studio returned from the brink.

Plus it’s one of the few chances to see Disney legends in a canon feature film. While staples of the parks, animated shorts, and merchandising, one does not see Mickey, Goofy, or Donald in the canon much. Fancy Free gets an edge over Ichabod and Mr. Toad because of the legends (and in spite of a frankly weird Edgar Bergen interlude).

Cars 2 would be far higher on the list if it were Cars – but it’s not. It’s Cars 2. Prepare for a decent amount this on the list. This does not mean that sequels are inferior films, but being a sequel it does create a unique comparative relationship. For example, does Cars 2 improve upon things from Cars? The artistry evolved. We got a decent enough story about Mater, but ultimately it feels more like an excuse to make another Cars film and bring the characters back for a feature than because the Cars universe had something to tell us.

I mean, you’ll notice that Cars 3 has not appeared on the list yet. 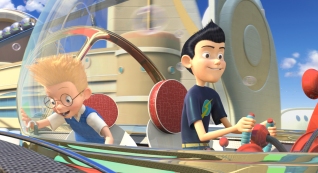 Consider it this way. Look at Disney animated films today and the classic Disney animated films: Snow White and Cinderella versus Elsa and Moana. Perhaps even better, look at the princess cameo in Ralph Wrecks the Internet where we see the ladies across all eras side-by-side. That reflects how the modern Disney applies digital technologies to a distinctly Disney style of animation.

Meet the Robinsons is near the tail end of of the Experimental Era where they had no quite mastered that marriage yet. In many ways, Meet the Robinsons could have come out of any number of animation studios: Dreamworks, Blue Sky, etc. It’s a fun story, as always, with some great moments, but it does not rate among true Disney royalty. 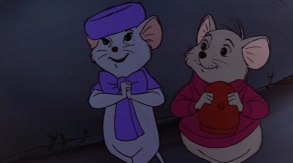 This one hurt. I love Bernard and Bianca, and it’s hard not to care about little orphan Penny. The legacy of the film is pretty amazing, too. Not only did it generate Disney’s first in-canon sequel, The Rescuers Down Under, it also helped to create the Rescue Rangers. While only slightly related, the idea of a mouse rescue agency moved from Bernard and Bianca to Chip, Dale, Gadget, and Monterey Jack.

But as stated in the open, this is a comparative list and decisions are necessary. We are, in 1977, at a crossroads in Disney history. Walt has died. The Nine Old Men are gone from the studio with a new generation at the helm who have to figure out how to steer the ship. I don’t think it’s unfair to say that they did not always manage that well – among the animators for this film is Don Bluth who would depart the studio with several other key animators in the coming years to form a competing studio (who arguably outperform Disney for the better part of a decade).

Why did he and the others leave? They did not like the new steering of the ship, away from the classic Disney animation into uncharted territory (perhaps no surprise why Bluth’s Anastasia was long considered a Disney princess by fans).

The story is great, but the animation for the Rescuers pales next to others in the canon, the story remains somewhat bland, and we don’t have the charming Disney music to elevate it.

For Bolt we are re-visiting the tale of Meet the Robinsons with two distinct advantages. First, I argue that Bolt has a better story and an overall better soundtrack with a noticeable shift in the animation. That brings us to second: this is the film that ends the Experimental Era for the studio. The next release would be The Princess and the Frog (where they return to traditional animation), followed by the expensive but vital follow-up Tangled that makes the digital jump.

While Bolt is, dare I say, one of the more forgettable Disney films among generations before and after this era, it does play a role in the artistic progression of the studio. 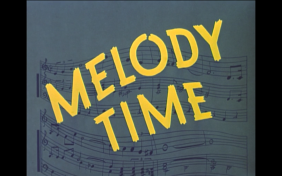 Melody Time is part of a period trifecta. Disney found gold with Fantasia (which I’m sure you know comes much later on this list). Make Mine Music and Melody Time are the popular music follow-ups to Fantasia, cashing in on that successful formula while allowing Disney to produce a feature-length film on its limited post-war budget.

For those thinking, “I’ve seen this, but which one is it again?” we are discussing the collection of Once Upon a Wintertime, Bumble Boogie, The Legend of Johnny Appleseed, Little Toot, Trees, Blame It on the Samba, and Pecos Bill.

The shorts are wonderful in much the same way as Fantasia, but in that way is derivative. The idea itself is not novel as Disney already presented the public with Fantasia and then again with Make Mine Music. The animation is charming but done quickly and on a budget.

Like most of our top ten, the film is not terrible but does not stack up against the remaining films. It is, they all are, important pages in the history of Disney animation though.

Disney debates sometimes get heated, and I do not like “Disney elitists”. That said, some things are and some things are not. Those distinctions are critical to any discussion of the fandom.

For example, some will review the completed list and ask questions like, “Where is The Nightmare Before Christmas?” or, “Where is Mary Poppins?”

This list restricts itself to canon Disney and Pixar films. While some titles are absolutely Walt Disney owned, that does not mean that they are products of Walt Disney Animated Studio. Aladdin is a canon film. The straight-to-video sequels, however, are from Walt Disney Television Animation – different studio in the House of Mouse.

Therefore, no Nightmare Before Christmas, no Mary Poppins, no Anastasia, no Return of Jafar, no Lion King 2, no Who Framed Roger Rabbit, no Spies in Disguise.